Skip to content (Press Enter)
What is the deepest driving force in your life?
Have you ever asked yourself that existential question? Done some soul searching to find the perhaps not so obvious reasons behind what drives you. The thing working at the very core level within you. Motivating you to get out of bed each morning, sometimes even excited to start the new day.
There’s been a lot of interference in my sense of drive throughout life.
Looking back it has been a wobbly road, it certainly hasn’t been steady. The last time I lost my drive almost completely was 9 years ago. It was sort of a spiritual crisis. No; it was a spiritual crisis and a big one. Because of a muddled situation where love went “wrong” and suddenly I found myself not knowing if I was a victim or a perpetrator in the situation.
In hindsight, I’ve realized that I was neither. It’s not black or white like you discover to be true about almost every single situation, as you mature. No hero and no villain, just fragile human beings making mistakes…
I’ve made my peace with it now. The biggest problem was that I lost trust in love and life itself for a while. I semi-subconsciously concluded that it apparently was “dangerous” to love that much or be that happy. Because then bad things would always happen; something that felt like a shocking fall from heights.
I had an intuition of it being a repetition of unhealed trauma from childhood. That terrible sensation of falling apart and shutting down. Becoming numb.

When using the words: “Always” or “Never” about a situation, it is often a statement made by your wounded inner child, who once perceived it exactly like that. As you can figure or perhaps have experienced similarly yourself, it is a rather depressing belief to live by. NO drive in that one.
It took some years to get over it; to realize that it is in fact just a belief based on some past experience: not the Truth.

I know that artistic expression is a wonderful way for us to heal ourselves and potentially others. Perhaps one of the best. But being someone who used to feel most inspired when being in a state of joy and expanded awareness, it took a while to get my creative drive back.
Eventually, it did come back though, Thank God!
As a blessing in disguise, I’ve discovered the benefits of allowing myself to express ALL feelings through art, which I didn’t fully do before. Particularly through poetry. And it perhaps doesn’t feel elevating to create from these darker emotions, but it does feel very meaningful and sometimes even healing.

Another thing I have often wondered about; is how on earth some people can be motivated or inspired by being criticized or having to prove themselves; to prove their worth. For some they seem to get spurred by it, wanting to do their absolute best. To “show them”!

Our society seems to be in a trance with this competitive attitude and attempting to win or be the “best” at practically everything, that can be made into a competition.
It is a rather masculine approach; this competitive mindset.  It must originate from the old “survival of the fittest” belief system.

I instead, will most likely lose my drive under such circumstances. I will feel discouraged by the pressure, eventually lose my drive, joy and creativity and probably soon give up. I prefer a gentler, freer, more playful and explorative approach with absolutely nothing to prove.

Preferably attempting to express an intrinsic value I’ve found in something, like a tribute to life’s beauty: a declaration of love. Or perhaps trying to convey a certain realization I’ve had. I’m not sure, but a more feminine approach? For me it could pretty much be traced down to: does this feel like being driven by love or driven by fear?

The Chronic fatigue syndrome for me probably (at least partly) stems from being driven, more or less consciously, by fear for far too long. And simply being too sensitive to “uphold” that state of being anymore.
Like Pete Walker states in his book about complex PTSD; he calls it to always have this underlying sense of being forced in life: a certain alertness. At times, it takes the backseat but basically, a little fear is “simmering” below the surface, always. It’s exhausting in the long run for your body.

I can’t be driven by fear anymore. Well, not without getting sick again, I’m sure.
Like many sensitive kindred-spirits, I have for a long time longed to just be “allowed” to let my own organic life force drive me: it’s flows and rhythms and natural tendencies. It’s curiosities and sense of wonder.
Not to have to prove my worth or value – but to instead express life’s innate worth and immense value; which is the same as my own and everybody else’s innate worth and immense value.

It takes trust to live like that; a trust that still escapes me, sometimes. But it feels like I’ve finally tip-toed onto the right pathJ

Here’s a little mouse-fellow I drew for my book the other day. It’s great to re-discover the joy of drawing!

Somebody had made an arrow of stones down at the beach, pointing towards a narrow path across the field (if only your guidance always was so clear, right..) 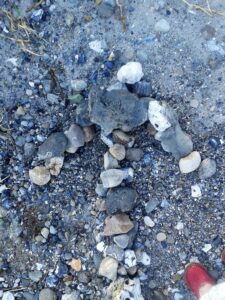 Thizzles can actually be quite pretty too;) 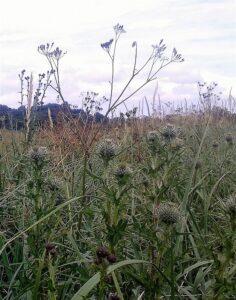 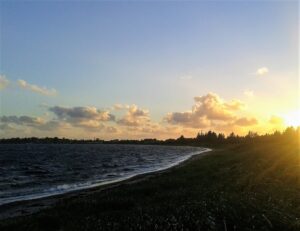